In this blog entry we will share a business case of Digital Magic helping a business evolve a fledgling idea into a mature product.

A while back a person has decided to establish an indoor shooting range business. His plan was to refurbish an abandoned factory building and hire an administrator who would deal with shooting range customer admissions.

Selling bullets or cartridges, it is easy to ensure that every item has been accounted for by comparing the physical state of ammo inventory to the amount of cash the company account has received since the last inventory. This is not so with "shooting time", which is not easily tangible.

We sat together with the business owner, analysing the idea, crystallising it into a vision of an actual product.

One of the fundamental questions was the identification of a customer account with which to associate credit. Having discarded technologies such as loyalty cards, RFID stamps, optical face recognition and mobile phone-based IDs, we have converged at customer identification based on smart cards. To be more precise, Estonian ID cards (as the business resides in Estonia, where every resident possesses such a card).

The solution was then straightforward:

The business owner took care of installing high-current electrics and devices: each shooting lane was now equipped with lighting, electrical motors shifting the shooting target along the rail, and motor control joysticks - all connected to a power source. Each lane could now individually be powered up or down by simply closing the corresponding pair of wires.

Actual activation and deactivation of each lane was now up to an intelligent system, which - both hardware and software - was to be designed, implemented and installed by Digital Magic.

The diagram below depicts the overall design: 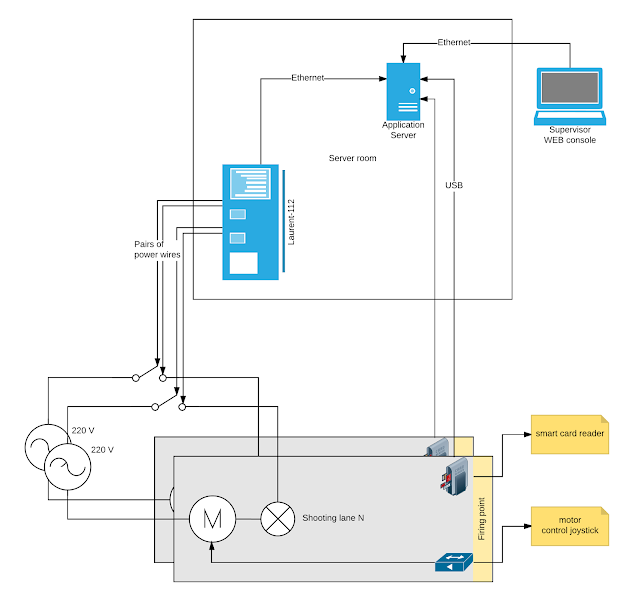 First order of business was to choose a controller that would become the bridge between the software customer account management system and the high-current hardware lane controls.

We have chosen the Laurent-112 Ethernet network relay, which has the ability to:
The next piece of hardware were smart card readers - we just used generic USB readers. One challenge was that the firing points were some distance away from the server room, so each reader USB cable was extended with 20+ meter long extension cables each featuring a signal repeater.

The server running the actual management application is a simple office PC running Ubuntu, too boring for its specs to be listed :) One requirement for the PC, though, was having at least 7 USB ports - one for each shooting lane. We have also tried connecting all readers via an USB hub with success - the server could still discern individual card readers - but eventually settled on the simpler hub-less solution.

The application server is the brain behind the operation.

It is an application based on Play and Akka Persistence - you can read more about the latter technology in this blog post, however the choice of frameworks did not matter much for this business case, as the project was small-scale.

Using billing reports generated by the system, the business owner was now able to easily inventory shooting time by comparing banking account cash flows to the amount of credit sold as registered by the system.

On a rare occasion, e.g. sometimes upon Ubuntu server reboot, the USB port names would change (so that e.g. the first shooting lane's card reader, which was previously named OMNIKEY CardMan 1021 01 00, would now be named e.g. OMNIKEY CardMan 1021 06 00). The occasions were so rare that the business owner had no trouble fixing them by re-mapping ports via the WEB management console.

In order to correctly handle application crashes or application server hardware failures, the Laurent-112 PCB needs to be configured to periodically ping the application to sense outages - in such cases, the PCB would open all relays, deactivating all shooting lanes, as by this moment the main application has lost the ability to track credit. At this particular installation, we have not done so, but it is perfectly possible by e.g. running the application as a Docker container with a heartbeat port exposed. Any kind of a crash would render the port inaccessible.


Ideas for the future

Additional reports, such as a heat map report, which would help answering questions such as:

Also, the list of services offered by the automated system could be extended to selling not just shooting time, but also guns, ammo and targets, each with their automatically calculated prices based on tariffs, client track record, campaigns, etc.